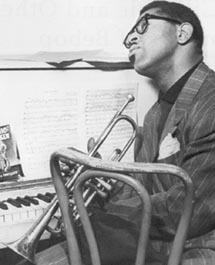 Though self taught, Dizzy Gillespie (born in 1917) can be described as a true virtuoso on his instrument, the trumpet. He completely changed the way the trumpet was played and constantly explored new ways in Jazz music, new ways that ultimately would come to define bebop. Gillespie moved to New York in 1937 and was hired by Teddy Hill in whose band he succeeded his idol Roy Eldridge. When Hill folded his band to become booking manager for Minton's Playhouse in New York, he gave free reign to eager young musicians like Gillespie and Kenny Clarke to experiment. In 1940 he met the man with whom he was to change the face and sound of Jazz, Charlie Parker. Shortly after that he joined Billy Eckstine's band and began hanging out at Minton's after hours. It was an ideal situation to be in for Gillespie, who found himself surrounded by a unique group of talented players whilst constantly switching between big band and small band. Soon he and Parker were co-leading a quintet which was to become one of the most influential small bands in Jazz history. When, in 1953 somebody fell on his trumpet during a party and badly bent the instrument, Gillespie discovered that he actually preferred it that way. The 45 degree angle of the bell made playing the trumpet whilst sight reading easier and it also allowed him to hear the notes he was playing sooner. He was to continue playing with the unusually shaped trumpet until the end of his career. In the mid-50s he embarked upon a collaboration with Norman Granz's Jazz at the Philharmonic and he also began a long series of recording dates for Granz in which he teamed up with a rich mixture of musicians. He became well known for various activities outside music such as the work he did for the United Nations and many campaigns as a civil rights activist. He was a competitive player who enjoyed a rich display of virtuosity, but more importantly, he was one of only a select group of true innovators who profoundly reshaped Jazz music.  He died in 1993.